Last month, the Society for Human Resource Management’s (SHRM) announced the launch of “Getting Talent Back to Work,” a national initiative supporting the hiring of individuals with criminal records.  Through this “second-chance” initiative, business executives and association leaders are asked to take a pledge to consider qualified individuals for job opportunities, regardless of any criminal records.

At the same time, we are seeing more and more stories involving incarceration, crime rates, presidential pardons, background screening, and legislation intended to “assist” with reintegration into society saturate the news lately. While most people agree that reintegration after incarceration is important to society overall, as evidenced by SHRM’s new initiative, we would be remiss if we didn’t also recognize that there are some, at a minimum, perceived risks associated with such reintegration.

The many facets to this process, including securing gainful employment, ideally should be fair for all parties involved. Current legislation demands that we are fair to the newly released person in order to help with reintegration. However, it does little to ensure fairness to the employer, essentially taking away employers’ rights to control their own hiring processes.  Employers need to be concerned not only with ex-offenders re-entering the workforce, but also about their own specific priorities, including protecting employees, customers, property, and finances.  What are the consequences if this formerly incarcerated new employee is a recidivist?

A recidivist is a person who is released from prison and who later commits another crime, or reoffends, such as a parole violation or the commission of a new crime.  Unfortunately, recidivism is rampant across the country. According to a recent study by the United States Sentencing Commission, almost three-quarters (72.8%) of federal offenders sentenced in fiscal year 2016 had been convicted of a prior offense. The average number of previous convictions was a staggering 6.1 among offenders with criminal history. 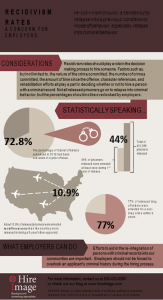 Click Here to View our Infographic on the latest Recidvisim Rates.

According to the report, prisoners released after serving time for property offenses were the most likely to recidivate, or relapse, into crime. Within five years of release, 82 percent of property offenders were arrested for a new crime, compared to 77 percent of drug offenders, 74 percent of public order offenders, and 71 percent of violent offenders, the report found. The report also found that recidivism was highest among males, blacks, and young adults.

These findings, unfortunately, are not new and their results are even further evidenced by the stories we hear about. For instance, a priest in Florida was murdered by a career criminal he was attempting to help through an outreach program for men who had recently been released from prison. The Reverend Rene Wayne Robert was aware of his assailant’s criminal history and in trying to help him get back on his feet, he became his next victim. In Washington D.C., a prominent business man and his family were held for ransom and then murdered by a former employee with a criminal record whom the business man had given a second chance at employment in his welding business.

With the consequences of recidivism playing out in the news, how lawmakers can continue to enact new and more restrictive laws that deny employers the right to know who is in their midst is unclear. Despite the evidence to the contrary, legislators continue to reduce barriers for criminals to gain employment after being released from prison. Lawmakers want to level the playing field with legislation such as Ban the Box, affecting more states and cities each year. The legislation is more than just removing the question on the initial application of whether the applicant has a prior criminal history.  The trend is how far back an employer can obtain the records, if the employer can use the information returned on a criminal record, increased notifications and other regulatory burdens. These steps are taking the employers out of making their own informed employment decisions.  Imposing new laws and rules that force employers to relinquish control over their own business processes, without receiving any benefit is unacceptable.

The alarming recidivism rates should be evidence enough that employers and business owners must have access to criminal history information if they are to keep their workplaces safe.  This can only be done by conducting comprehensive background screening, while complying to all applicable rules, regulations, and laws. Background screening is invaluable to the interest of public safety, especially as more federal and local policies are introduced that curb an employer’s ability to use criminal history information in employment decisions.

We, as a society, need to find a better way to weigh the rights of the formerly incarcerated in finding employment with the rights of an employer to control their own hiring process. For common-sense reintegration efforts to truly work, lawmakers should look at the numbers supplied by their own agencies, recognize that businesses must continue to have a right to look at criminal history in order to mitigate risk in their workplaces, and come up with creative ways to assist reintegration efforts without imposing new, more restrictive laws.

Tax incentives are one way to assist employers able and willing to take the risk. The creation of a re-entry certification program whereby the government attests to and backs the individual’s fitness for the workplace and provides immunity for the employer who relies on those certifications is another positive step.  Additionally, programs that focus on helping individuals gain skills that may have been lost or never learned due to years behind bars should be applauded.  There have been, and continue to be, similar efforts to the SHRM Initiative.  For example, President Obama had created the Fair Chance Business Pledge in 2016, a call-to-action for business owners to improve their communities by helping eliminate barriers for those with criminal records.  More recently, President Trump signed the First Step (“Formerly Incarcerated Reenter Society Transformed Safely Transitioning Every Person”) Act into law, reducing sentences and introducing opportunities for early release for people serving time in federal prisons, impacting over 180,000 people.

Our hope would be a shift in the “leveling of the playing field,” so that businesses can perform the best due diligence possible to keep their workplaces safe, while assisting with reintegration in ways that make sense for all parties involved.  Throughout this process, the value of background screening cannot be understated. A trusted partner can help navigate the complexities of the varying state and municipal laws, while enabling employers to make the best, most risk-adverse decision for their businesses.