Most people in the background screening industry for a long time often think they’ve seen it all.  And then, something, or someone, else comes along.  No matter the story, circumstances, or day, what it often comes down to is this one certain truth – People Lie!  It could be a small fib that may not be much in and of itself (other than a possible red flag into that person’s character).  Or, it could be a huge untruth concerning an educational degree that really does not exist or a job that occurred only in an applicant’s imagination.  This unfortunate truth, coupled with safety concerns and the high costs of potential lawsuits, is why background screening is no longer an option for employers, but a necessity.

Lying on resumes, CVs, employment applications, or even LinkedIn is nothing new.  It has been going on for years.  However, today, it is more widespread than most people may think.  In fact, a recent survey conducted by TopResume reports that a staggering 78% of HR professionals, recruiters, and hiring managers have caught a candidate lying on a resume.  It is difficult to understand why they think it’s worth it.  According to Amanda Augustine, career advice expert for TopResume, a certified professional career coach (CPCC), and a certified professional resume writer (CPRW): “[l]ying during the job search is typically a deal-breaker for most employers.”

These results beg the questions–what exactly is everyone lying about and who is lying?  According to the survey, the top two most common lies are with regard to the existence, or lack thereof, of academic degree and criminal records.  With regard to who is lying, another survey conducted by OfficeTeam indicates that that age does make a difference, with over 50% of people aged 18-35 admitting to lying on a resume, nearly 20% higher than those over 55 years old. 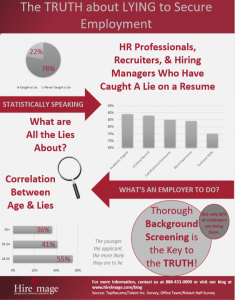 What Does All of This Mean for Employers?

For starters, if you are an employer who does not conduct thorough background screenings on your applicants, there is a high probability that you will hire someone who has lied on their resume or employment application.  We stress the word “thorough” because, as demonstrated by the cases mentioned below, it is not enough to simply do the fastest and cheapest screening so that you can say you have done one.  It really is about what makes the most sense in your industry and our ever-increasing mobile society.

There are many unfortunate situations that happen every day across the country that could be avoided if employers stop taking the applicant-provided information at face value.  Some potentially harmful situations are nullified before any real harm can occur.  For example, when a company finds out about the lie and terminates the employee immediately.  Other times, the employer or other employees are not as fortunate.  In one such case, a man with a criminal past was hired to sell vacuums door-to-door.  The man lied about his prior criminal record and because the company only conducted a regional search, rather than national, it did not discover how extensive his criminal record was, including rape.  Once on the job, he sexually harassed and assaulted three women and was later convicted of multiple felony and misdemeanor charges.  The women also successfully brought suit against the company claiming fraudulent misrepresentation (company was vicariously liable for the employee), fraudulent concealment, and negligent hiring, retention, and supervision.

In a more recent case, a woman with a criminal history not only lied, but stole the identities of various nannies and used them as her own to gain access to unsuspecting families’ homes.  While there were cursory background screenings along the way, they were not enough to discover that this woman was not who she said she was, including her expansive criminal record.  In another case, a caregiver lied about her criminal past and later stole approximately $30,000 from an elderly woman.  While a background check was performed, it only checked for sexual offenses.  Had they conducted a full background screening, her criminal record would have shown up and the family never would have hired her.

Lying from All Walks of Life for All Types of Jobs

Unfortunately, deceitful behavior is not limited to a certain type of person or job level.  It happens everywhere – from entry-level positions to high-level executives and even to positions of trust.  In Texas, an assistant district attorney was fired last year for lying on her application when she claimed she had never been arrested or convicted of a crime.  She had, in fact, been convicted of theft in the Cayman Islands.  As an assistant district attorney, she is held to an even higher standard of truthfulness, both as a member of the Texas Bar and a representative of the state.  Yet, according to the District Attorney’s office, her background was checked, but the databases returned no information regarding this conviction.  Thankfully, background screening procedures for all Harris County District Attorney’s Office applicants have since been amended.

There are also many high-profile cases of lying throughout the years.  You may recall a vice president of Wal-Mart, who resigned after it was discovered that he had not received the degree indicated on his resume;  the CEO of Yahoo, who misrepresented his degrees; or the first woman to be appointed the president and chairman of the US Olympic Committee, who resigned after admitting she had put false information on her resume – to name just a few.

What can Employers do?

Perhaps you will discover only a small lie that ultimately does not mean much.  However, you may discover something much more serious that could potentially pose a threat to you, your other employees, your customers, or your property.  Can you afford not to find out?

At Hire Image, we understand and value the importance of thorough, accurate background screenings.   Contact us to discuss your situation and ways in which we can help.