In 2014, Utah legislators implemented extensive criminal justice reform with the passage of the Justice Reinvestment Initiative (JRI) to reduce both the number of people sent to prison and those who later reoffend.  A legislative audit released this week shows that only one of those goals was met – the number of prisoners, especially those incarcerated for low-level drug offenses, has been reduced over the years. With regard to reoffenders; however, the audit found that recidivism rates among low-level drug offenders actually increased from 29% in 2013 to 37% in 2018.

According to the report, “Although Utah made changes to its sentencing guidelines, which led to a drop in the state’s prison population, features of JRI designed to provide strong alternatives to incarceration were not implemented.” While more people received community supervision rather than prison time, the state failed to put in place procedures to “ensure oversight and accountability.” Additionally, it only partially improved drug and mental health treatments offered.

Auditors suggested that the state’s criminal justice-related agencies, including the Division of Substance Abuse and Mental Health, the court system, the Board of Pardons and Parole and the Department of Public Safety start working together to address these problems and have better data and tracking of offenders in order to try to make any significant impact on recidivism rates.

Our Recidivism Infographic below is another great tool to see some staggering statistics. 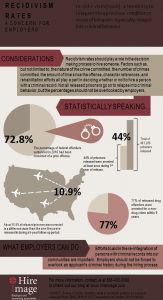 Please contact us if you would like to discuss how recidivism, especially in light of increasing Ban the Box laws, can impact your own background screening policies and procedures.